- August 27, 2013
Calder spent Sunday night at his buddy, Dylan's house, so after Boone got up from his morning nap on Monday I fed him and thought I would take advantage of only having one kid and run some errands.

Boone's butt looked a bit red so I figured he could have some naked time while I got dressed and ready to run our errands. I stripped Boone down, put him on a blanket, and gathered some toys around him. Seconds after I put him down he started to complain - he wasn't crying, just grumbling. I increased my pace and headed to the bedroom to get dressed. I knew I didn't have a lot of time. The grumbling continued as I got dressed, but after about a minute or so it stopped. I figured he found some toy that suited his current mood and decided to brush my hair and teeth while he was happy. I couldn't have been more wrong.

Apparently, Boone heard my rant last week about the car seat not being a shitter. We were a mere 10 minutes away from being in the van and rather than having his usual poop explosion there, he kindly decided to do it at home. Unfortunately for me, he just so happened to be unsupervised and naked.

Approximately 3 minutes had elapsed since I left Boone in the living room naked when I returned to find this. Boone is enjoying some sort of poop slip and slide. What you aren't seeing here is that when I arrived I had to pull that poopy blanket out of his mouth. Please don't call social services :-) 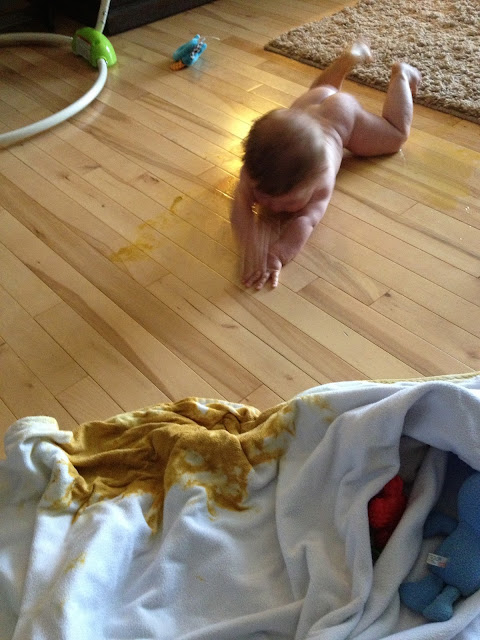 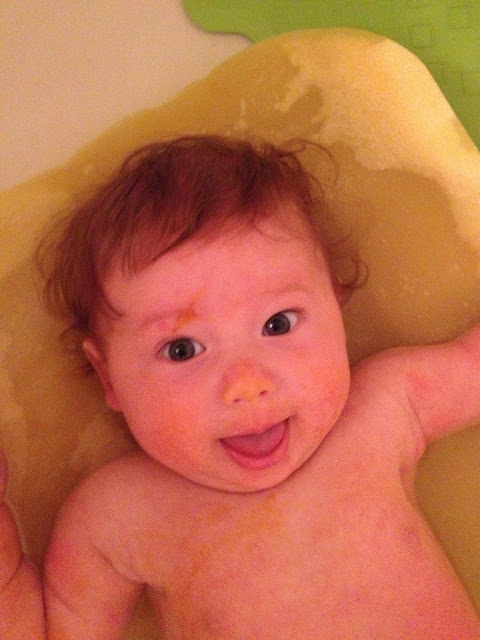 This is not a great shot, but you can see poop on his eyebrow. It is also on his nose, cheeks and chin (not to mention every other part of his body - well minus his lips. . . he had licked those clean). I had to give Boone two baths - after I rinsed all the poop off him, the water was such a cloudy yellow, I figured there was no way he was going to be clean coming out of it. Lather. Rinse. Repeat.

I guess I can be thankful that this time he had only went 8 days between bowel moments and not 16.

Once again, I hope I didn't ruin your breakfast. Happy Tuesday!
Boone

- July 25, 2018
So I didn’t totally want to read this book. I felt judged by the title. So at the risk of being embarrassed, here it is. I am terrible at washing my face before bed. Like REALLY terrible. I know I should and it feels good when I do it, but I barely ever do it. So that title made me feel yelled at. It pointed out something I knew I should be doing, but didn’t bother to take the time to do. Judged. But on the recommend of A LOT of people, I cracked the spine and read it. I am glad I did. Here are my big 3 takes: I live in chaos. 3 kids. A billet turned kid. A husband. 2 full-time working parents. 1 hour commute each day. Hockey. Homework. Piano. Gymnastics. Baseball. It adds up to crazy. But a good crazy. Like I wouldn’t want to do without a single one of those things. And within all that chaos, I meal plan like nobody’s business. I make cake pops for birthday parties. I pack snacks for the rink. I bake muffins.   I take pictures and make photo albums. I turn video footage in
Read more