Showing posts from November, 2010
Show all

- November 24, 2010
So, once again, Braxton Hick's contractions are ruling my life.  I consider myself an expert at Braxton Hicks having experienced them for my whole pregnancy with Calder.

For those of you who don't know, Braxton Hicks are "practice contractions".  The uterus contracts just like it does in labour, except you're not in labor.    Most women get them in their third trimester and the intensity of the contraction varies woman to woman.  They can range from intense, taking your breath away, to slightly painful or annoying.  They say if you get more than 4 an hour, you should head to the hospital.

My Braxton Hicks started at 11 weeks.  I would wake up in the morning to a tightening of my uterus.  I would say these ones were neither painful or even annoying.  They were just there.  It actually feels kind of neat at this stage to feel the shape of your uterus and to realize that your baby is hanging out it there.  After that morning visit from Braxton, I wouldn't really…
Post a Comment
Read more 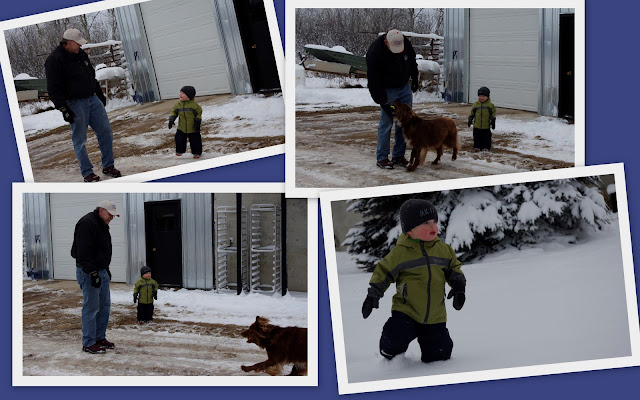 The first in-family hockey battle was this past Friday night in Tisdale.  The Shellbrook Elks vs Tisdale Ramblers.  Hugh vs Luke.


The battle between the boys started earlier in the week when Hugh asked Calder to give Uncle Luke a wet kiss (this would give Calder the best chance of passing on his bronchitis to Luke) and Luke kept offering Hugh chocolate bars.


Friday night, we all hoped in the van after work and headed to the game.  The first period was a tight battle between the two teams, with the Rambler's goalie holding them in the game.  The second and third periods were not nearly as tight and, in fact, at times, got a bit out of control.  At one point, the Elk's goalie came out to play the puck and was ran over by a Rambler player. The Elks responded on the next shift by taking a slap shot at the Rambler bench.  Luke may still be mad about that one.  Final score: 10 - 3 Elks.


The next day during Hugh's 4 hour nap (yes, you read correctly), Mom, Dad, Calder and I head…
Post a Comment
Read more

- November 11, 2010
So, I was just glancing back through my posts and the New Things Calder is Doing post from the start of October caught my eye.  The items on that list seem old now and it is only been a month and a half.  It is amazing how quickly they learn things and even more amazing how quickly I forget.

1.  Calder now rarely signs please, but is saying it on his own (sometimes with some gentle encouragement!).

3.  He RUNS up and down our hall.  Sometimes pushing some big truck and other times just flying on his own.  Hugh and I just hold our breath and wait for the occasional wipe out.

4.  Calder knows what a time-out is and a threat of one can often deter whatever "no-no" he is doing, It may stop him from standing on the couch, climbing on the table, or throwing his cars just to name a few of his favorites.

- November 03, 2010
Sharing is something that we are continually dealing with, as I am sure most parents with toddlers are.  Calder does o.k. with sharing.  And by o.k., I mean he only occasionally rips toys out of other children's hands and sometimes shares what he's eating with others.

We definitely have hit some roadblocks when it comes to sharing.  Calder knows the word "mine" and isn't afraid to use it.  As well, we don't have as many play dates at our house as we do at others.  It is one thing to share someone else's toys, and an other to share your own.

When it is all said and done, I should have been pleased by the sharing Calder was doing this morning.  He had his treat cup held out for our dog, Cleo.   Cleo had her entire snout in the cup as her tongue washed out the inside, cleaning up any Cheerios that came it's way.

Instead of being pleased with this great example of sharing, I was entirely grossed out. 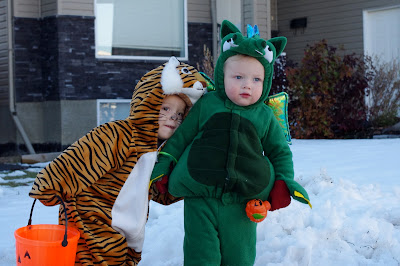 Calder almost didn't make it out for his first trick-or-treating (Although, I think Hugh may have went without him, he was so excited).  Calder just REFUSED to put his costume on (we had even done a trial run on Friday) and by refused, I do mean REFUSED.  He cried, he screamed, he trashed and he cried some more.  Hugh and I were even bribing him with his favorite thing....going outside and we were having no luck at all.  Thankfully my mom was here with some glow sticks.  The new toy seemed to do the trick.  It didn't hurt that Calder's friend Dylan showed up dressed in his tiger costume.  A little bribery and some peer pressure seemed to do the trick.


Calder did a great job of walking with Hugh, Dylan and Chris (Dylan's dad).  Mom and I were able to watch them hit the houses from our front window.  There was only one minor setback when Calder pulled a grave out of our neighbors lawn.  I was glad Chris was there to intervene, as Hugh was already at the door of the next h…
Post a Comment
Read more
More posts