Odds and Ends from June

- September 04, 2017
At the beginning of June, with the help of a committee I'm on, I organized a street hockey tournament. It was a really great day (I'm obviously biased). There were so many kids and families involved. Other than wishing for a little less wind, I could call the day a complete success. Calder invited a few of his Huskie Prospect teammates to play. It was a fabulous time!  After the event, we headed over to some friends for a bbq. A few of the kids ended up eating their suppers on the trampoline. Lawson kept standing up, so Hugh headed over to lay down the law. Just as he finished saying "You'll get a timeout if you do that again", Lawson held one finger up and said, "one". She then lifted her next two fingers and finished "two, three." Hugh could barely contain himself. Between her sassy attitude and the fact that we had no idea she could even count, let along represent those numbers, Hugh just zipped his lips and chose to walk away before he burst into laughter. In the coming weeks we learned that Lawson could actually count all the way to 9. Hilarious. 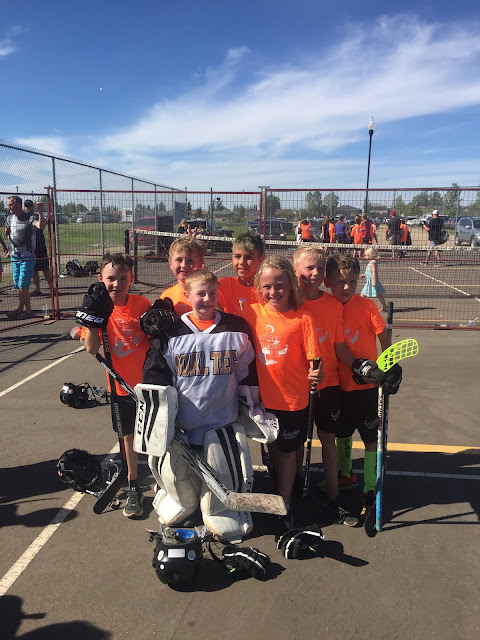 Our shock over Lawson's counting ability mostly comes from comparing her to Boone (I know, we shouldn't compare). At this time, Boone had just learned the number 4. He kept skipping it when he counted to 5. Lawson's acquisition of numbers made me feel a little better about myself. I had been worried that we hadn't spent enough time with Boone counting and that's why he was struggling. The fact that Lawson picked up counting from what we did with Boone just let me know that Boone not counting was more to do with the fact that he could care less about it than it was about the time we were spending doing it with him. Boone is a social being and has so many talents that truly aren't measurable compared to things like counting to a certain number or knowing all your letters. And for the record, if your reading this Boone, to this day Lawson has not counted higher than you! 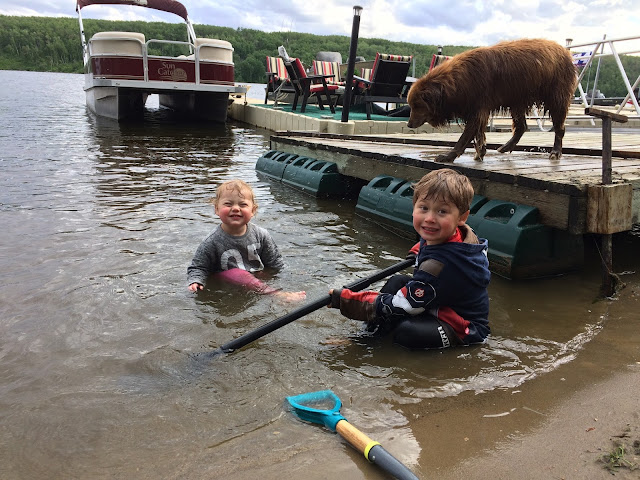 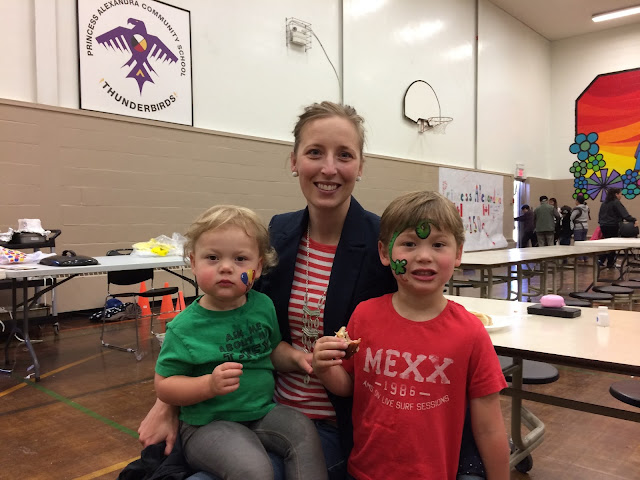 Our kids love the lake and we were able to spend a couple of weekends there in June. Unfortunately, both of them were miserably cold. You can see how Lawson and Boone are dressed. There is obviously no stopping them from getting wet and they weren't too bothered by the cold. This is actually a bit shocking to look back and see Boone sitting there because he did tend to get cold quite quickly while swimming even in July and August.
Hugh's school always puts on great events and we were able to help them celebrate the end of the year. Boone and Lawson love them some face painting! 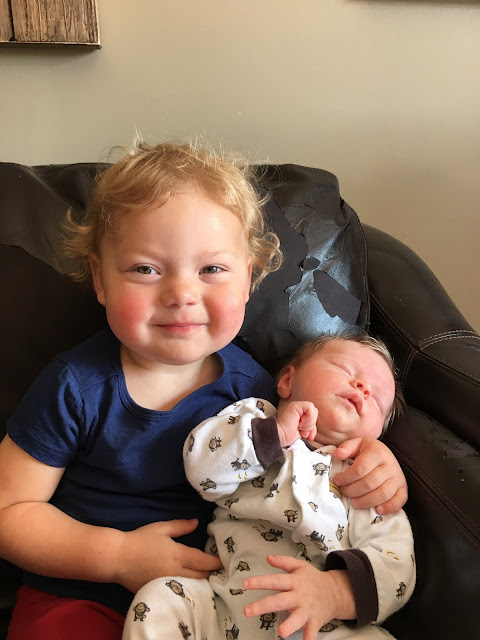 In May, my sister gave birth to a daughter, Leeta. She is an angel baby. Seriously, feel free to hate my sister a bit. We thought her oldest Nash was the best baby ever (rarely cried, ate well, and slept through the night) and then she had Leeta (never cries, eats better and also sleeps through the night). Lawson finally got to meet her newest girl cousin in June. She is pretty enamoured. 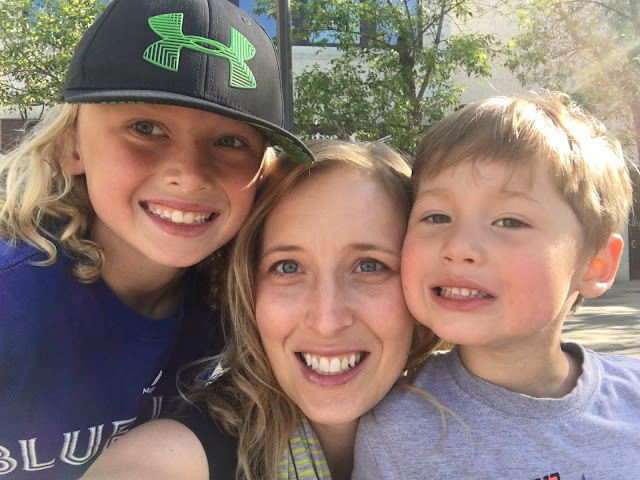 Calder loves Pokemon Go. I love doing things with him and so I also love Pokemon Go. There were two mornings in June where because of appointments, I was able to go for a walk downtown with him and play. Boone came the one morning and they even humoured me with a picture! 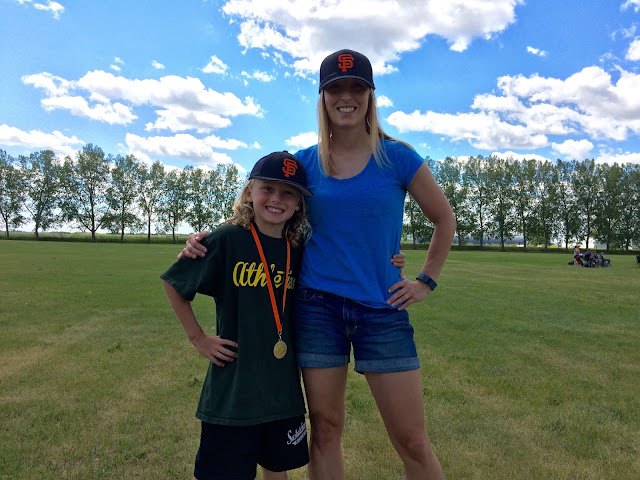 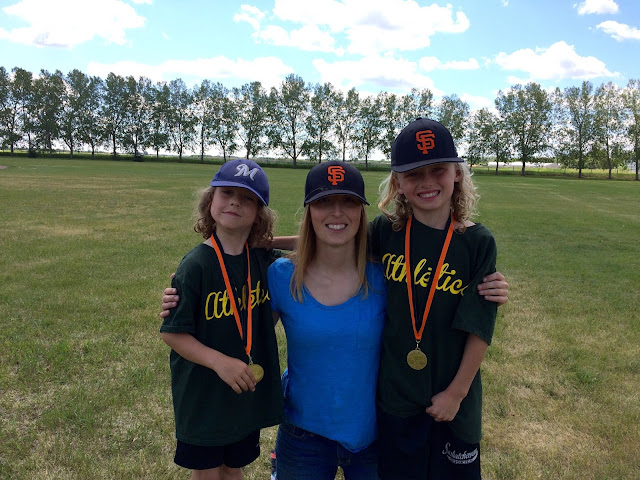 I am very happy and proud to say, that Calder's ball season ended in complete success. We struggled at the start, but as the season wore on, Calder quickly became a leader in his listening and cooperation. His skills improved and we both had fun. I can truly say that this experience improved our relationship. As apprehensive and unsure I was at the start about coaching, in the end it was the best thing I could have done. It was also great that my nephew, Pace, was also on the team!

My favorite moment of the season was the last play of our last game. Calder was playing shortstop, bases were loaded and a pop fly was hit just behind 3rd base. Calder ran over and made a nice catch. He then tagged 3rd base, where the runner had not tagged up and almost immediately after the runner from 2nd who had not tagged up either, made it to 3rd base and Calder tagged him out. A triple play. It was crazy. I think the best part about this is the fact that to this day, after explaining the play a dozen times, Calder still doesn't understand how he got 3 players out!

- July 25, 2018
So I didn’t totally want to read this book. I felt judged by the title. So at the risk of being embarrassed, here it is. I am terrible at washing my face before bed. Like REALLY terrible. I know I should and it feels good when I do it, but I barely ever do it. So that title made me feel yelled at. It pointed out something I knew I should be doing, but didn’t bother to take the time to do. Judged. But on the recommend of A LOT of people, I cracked the spine and read it. I am glad I did. Here are my big 3 takes: I live in chaos. 3 kids. A billet turned kid. A husband. 2 full-time working parents. 1 hour commute each day. Hockey. Homework. Piano. Gymnastics. Baseball. It adds up to crazy. But a good crazy. Like I wouldn’t want to do without a single one of those things. And within all that chaos, I meal plan like nobody’s business. I make cake pops for birthday parties. I pack snacks for the rink. I bake muffins.   I take pictures and make photo albums. I turn video footage in
Read more